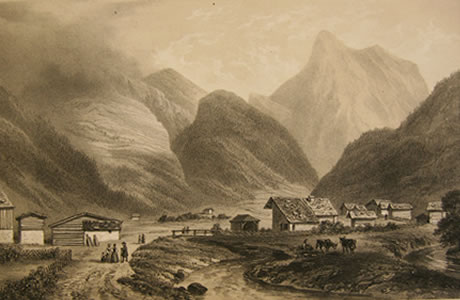 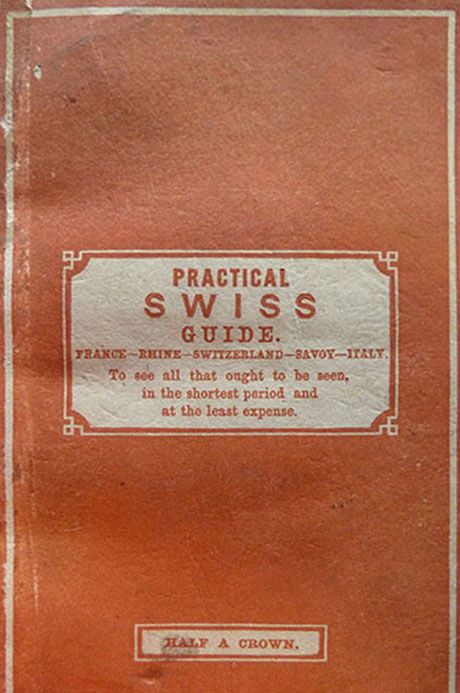 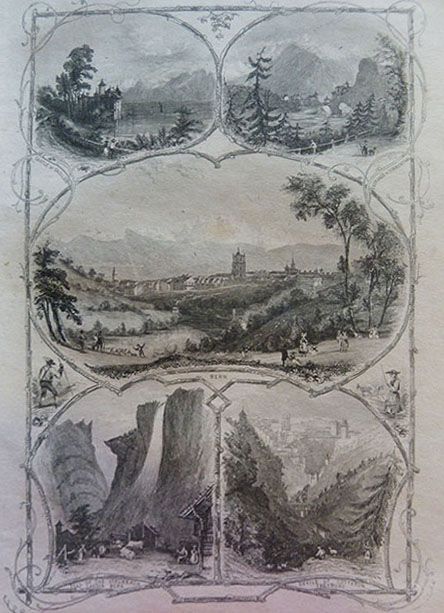 Before travel writing really took off as a genre in its own right, scientific descriptions of Switzerland filled the role of guide books. Albrecht von Haller’s botanical and geological descriptions were very popular, as was Saussure’s Voyages des Alpes 1779-1796, a geology book and one of the first descriptions of travelling in the wilderness. These were followed by works by nature enthusiasts like Rousseau, whose novel Julie or the New Héloise (1761) was set on Lake Geneva and in the Valais. Goethe’s descriptions of his travels in Switzerland lie somewhere between the two poles of science and Romanticism.

In 1789, William Coxe (1747-1828) published his Travels in Switzerland, a series of letters to William Melmoth that became the first real guide book to Switzerland. Coxe collected information related to the various routes he travelled. In 1793, Johann Gottfried Ebel, a German doctor who later settled in Zurich, (1764-1830) published his Guide to the pleasantest and most useful way to travel in Switzerland.

Switzerland was one of the first countries for which guide books were written. The British in particular had a huge appetite for this kind of literature, and 19th-century tourists prided themselves on having read the right books before departing on their expeditions. A total of 73 books and 416 editions of books on Switzerland were published in Britain between 1780 and 1914. Over 60 of these titles were published between 1860 and 1869.

The decisive step towards the modern guidebook was made by British publisher John Murray (1808-1892). In 1836 he introduced the concept of “sights” in his guidebooks. Murray’s descriptions of the Alps are very much influenced by the doctrine of the sublime and its delight in the magnificent and terrible. He writes: “The individual may fall into terrible chasms, ruptured glaciers that suddenly open up beneath his feet to swallow him up. Those that have escaped the dangers of Alpine heights may yet fall prey to those of its no less startling depths.”

Karl Baedeker’s (1801-1859) first travel guide adopted the compact size of Murray’s books and his system of rating particular sights with stars. Baedeker’s tour descriptions are supplied with practical information and plenty of facts on landmarks and local idiosyncrasies, and are presented in a manageable, easy-to-read way. The first Baedeker guide to Switzerland was published in 1844. In the late 1970s, the Swiss hotel industry introduced the stars as an official rating system for its hotels.

Nineteenth-century tourists had less time for their tours than their predecessors, and guide books started to function as a quality control for the routes and services provided. In the introduction to the Practical Swiss Guide of 1863 we read: “The object of these guides is to indicate all that is really essential and exclude all that is irrelevant! The age is a fast one! [...] Tourists have no time to lose and localities undergo quick changes [...] They will be found to command effectually the strictest economy of time, the broadest sweep of survey and the distinctest limits of what may most profitably be undertaken“.

Guidebooks of this period typically describe the most scenic routes and the most impressive panoramas. They even give the order in which they are best enjoyed.

None of the books fails to mention the famous walk up to the Gemmi Pass, “which stands among wild and desolate scenery... the view is uncommonly grand, the prospect taking in the whole valley of the Rhone and the southern chain of the Alps. It is here that one of the most remarkable paths begins [...] cut with great skill in the surface of the rock and built by the Tyrolese between 1736 and 1741.”

“It winds about in such a way that you can neither see the turning you have left or that which you are coming to but only the vast precipice below which in one part descends sheer down like a wall… and from which you are protected by nothing but a parapet at the edge of the path not more than three feet high. To some persons it is so trying that they are absolutely turned back especially in making the descent with the view of the abyss before them”. (Bradshaw’s Illustrated Handbook to Switzerland and the Tyrol, 1863).