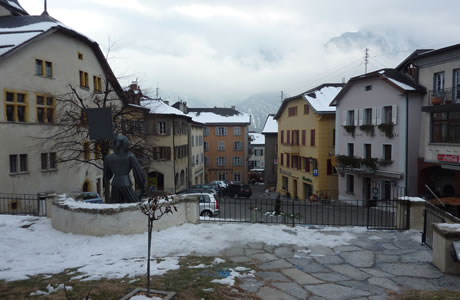 Starting point of the tour in Leuk: Forecourt of the Church of St. Stephen

In the Middle Ages the town of Leuk was an important trade centre thanks to its location, and from the 12th century onwards it was also the seat of the bishop. In 1863, a coach service was set up between Leuk and Leukerbad to cater to the increasing number of tourists.

In the mid-19th century Leuk was an important centre for the Valais. The omnibus stagecoach departed at scheduled intervals, taking those in search of rest and recreation onwards to Leukerbad. On her visit to Leuk, Miss Jemima still has time to look around Leuk before the next stagecoach leaves. She visits gothic St Stephen’s Church with its Romanesque tower. The church was completed in 1515, but the tower dates back to the 11th century. The church’s 17th-century Meschler altar (1668) and pulpit adorned with Baroque statues (1679) are particularly noteworthy. Miss Jemima finds the “bone room” with its 20,000 skulls rather eerie, whereas her encounter with the Valais Muscat wine is far more pleasant. The oldest vine in Switzerland can be found in Leuk. It was planted in 1798.