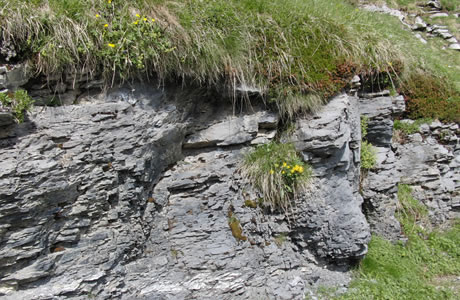 Starting point of the tour in Schwarenbach: about 300 meters infront of the guesthouse Schwarenbach (in the direction of Sunnbüel). Note the start sign.

The small tour group – who are traveling under the name Junior United Alpine Club – are very happy to come across the Schwarenbach guesthouse, where they have a rest and enjoy a cup of tea. The guesthouse belongs to Melchior Anderegg, the most famous mountain guide of his time.

Mountain guide Melchior Anderegg was the first to climb the Wildstrubel, along with Leslie Stephen, co-founder of the British Alpine Club. Alpinism became a popular sporting activity from the mid-19th century. Previously, people had steered clear of the Alps, believing them to be a “locus horribilis” inhabited by dragons, wyverns and witches. The arrival of the Romantic period, with its tendency for excessive sentimentality, radically altered public perception of the Alps, with the British in particular discovering a new-found passion for the mountains. In 1816, British Romantic poet Percy Bysshe Shelley wrote: “I did not know, nor could have ever imagined, what mountains are. When they suddenly came into my field of vision the enormous proportions of these lofty summits caused a feeling of ecstatic wonder within me, as if brought on by madness.”