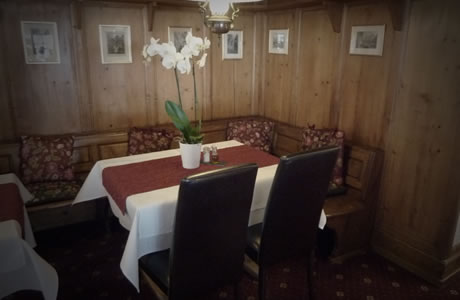 Starting point of the tour in Leukerbad village: Restaurant of the Belle Epoque Hotel Victoria. If closed, the tour can be started in front of the restaurant entrance.

Miss Jemima dines at Hotel Victoria Ritter and, whilst enjoying her food, reflects on her travel experiences.

For a long time the Gemmi was the best-known and most frequented passage from the canton of Berne to the canton of Valais. That meant many horse and mule owners took up residence in Kandersteg. In 1677 the authorities issued a transport regulation that controlled the prices porters and owners of pack animals could charge. In 1789 the Bernese government commissioned the building of the Ritter guesthouse in the style of an Emmental farmhouse. It served as a “place of refreshment and relief” for travellers and the sick. In 1856 its owner rechristened it “Victoria & Ritter”, after the English queen. Over afternoon tea, Miss Jemima eloquently records her experiences of Swiss hospitality. Her tour ends in the village chapel, which the people of Kandersteg built in 1510 for the use of visitors to the village as well as themselves.