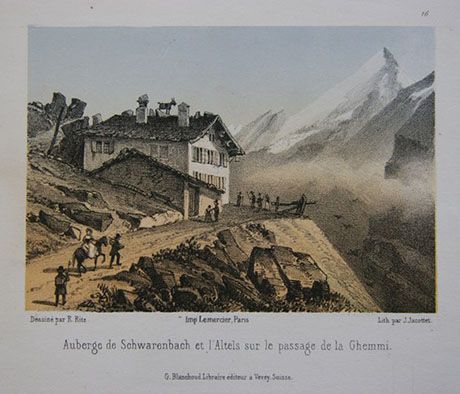 At the time of the tour, Jemima Morrell was 31 years old, an unmarried woman from Selby in Yorkshire, and a member of the new middle classes that formed during the Industrial Revolution. She had been privately educated at home with her three siblings. She had already been on several trips in Great Britain, and at the time her diary starts she is considering where she should go next: “What an anxious question this annual holiday is now becoming! Everybody has been to Scotland, some of us had done the Land’s End, Ireland is not everybody’s choice, the International Exhibition had tired us all of London, Scarbro’ is only suitable for invalids and children, the Lake District done years ago, and Fleetwood is worse than Scarbro’ – where shall we go next?”

Thomas Cook’s advertisement in 1863 was just the kind of adventure she was looking for. Switzerland was synonymous with the great outdoors and one of the prime destinations of 19th century expeditions.

The spirited Victorian lady thus embarked on a three-week expedition to Switzerland, suitably accompanied by her brother and the Junior Alpine Club. She meticulously recorded her impressions, with wryly humorous commentaries. She had a decidedly Romantic view of nature and the splendours of the pristine wilds – of which the towering peaks of the Swiss Alps were the very embodiment. They stood for the raw beauty of untamed nature, for passion and for freedom.

Jemima Morrell was well-read and her view of Switzerland was coloured by the poets and painters she admired. On the Gemmi, she recites “Echo, upon the Gemmi” by William Wordsworth (1770-1850), and looking down from Leuk into the Rhone valley she quotes John Ruskin, the famous 19th-century British painter, who visited Switzerland many times.
In 1867, Jemima Morrell married John Broadley Greenwood, a wealthy landowner, with whom she had a son, Robert Morrell Greenwood.