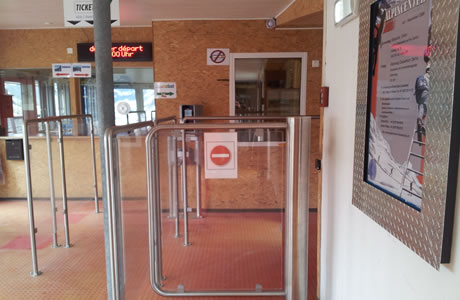 The Gemmi Pass is one of the Alp’s most spectacular bridle paths. From the 14th century it was used both for transporting goods and by spa guests seeking the healing treatments in Leukerbad.

In her British travel guide, Miss Jemima reads that the Gemmi Pass is “the most exceptional trail in the Alps”. The path is a demanding and treacherous hike, with sharp twists and turns next to sheer, seemingly bottomless drops. Since the 14th century the Gemmi Pass has been the most important route for moving goods between the cantons of Berne and Valais. The mountain pass still there today was blasted into the rock in 1739. After the climb, Miss Jemima documents the experience in her journal, writing how she trembled as they crawled under the enormous overhanging rock faces, their sheer size and might making she and her companions fear for their lives. The view from the top, over her first snow field and across the Alpine peaks, is, however, more than enough reward for her exertions.