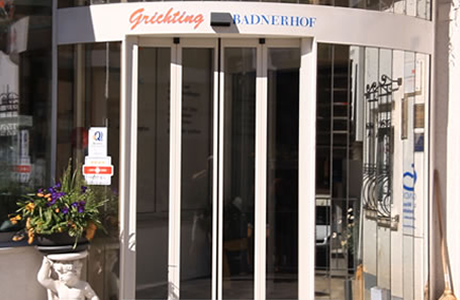 Starting point of the tour in Leukerbad: Entrance of the hotel Grichting & Badnerhof

Leukerbad has been a well-known spa town since the 14th century and gained inter-
national recognition in 1863. Spa treatments were quite an ordeal in former days, with guests spending many hours at a time in the hot water.

Miss Jemima encounters the first spa guests on their way to the spa early in the morning. The bathers wear long, loose-fitting clothes made from wool or rough linen and always cover their heads. Men and women bathe together – something that is rather shocking for the fine Victorian lady. Spa treatments typically lasted between 100 to 200 hours, during which time it was believed all impurities would leave the body through the skin. It was therefore seen as a positive sign when the skin became red and inflamed. It would itch, burn, and peel, and patients would often experience fever, chills and insomnia. Once this state had been reached, bathing time would be reduced.