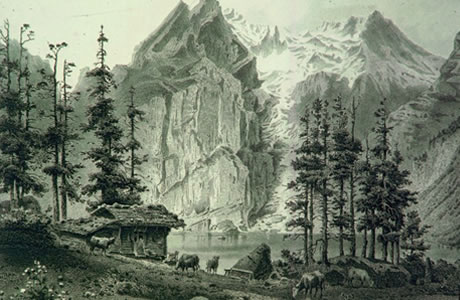 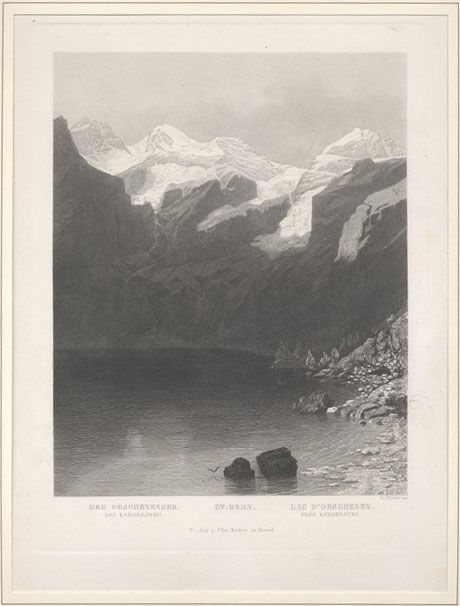 The terror of the mountains

In 1336, Petrarch climbed Mont Ventoux in the company of his brother. His report of this experience is the first personal description of the mountain landscape: “At first I stood there in a daze, owing to the unaccustomed quality of the air and the effect of the sweeping panorama spread out before me. I looked down and saw the clouds beneath my feet, and the descriptions of Athos and Olympus suddenly no longer seemed quite so incredible…” Petrarch was one of the first to describe the overwhelming exhilaration, the sublime experience, of reaching a mountain summit. Petrarch’s ascent is also interpreted as a pilgrimage or rite of initiation.

The Alps as a locus horribilis

Petrarch’s description of his ascent remained one of the very few of its kind for hundreds of years. Until the 17th century, the Alps were seen as a hostile terrain, a “locus horribilis” that should be avoided. The few who had to cross them did so with fear and trembling, and had to endure great difficulties and dangers. The mountains were generally regarded as home to dragons and wyverns, a haven for witches. Thunderstorms and snowfall were interpreted as a product of the wild feasts these wicked women celebrated among the barren peaks. The treatise Les délices de la Suisse (1730), one of the earliest descriptions of Switzerland, informs us that: “The dreadful scale of the Alps and the eternal snow are truly terrifying.”

In the 17th century, people began to question the biblical story of creation. The mountains, they said, were not created by God, but were remnants of the Great Flood. People began to wonder how exactly the world and the mountains came into existence. The Alps became a focus of scientific investigation. A variety of geological theories were formulated, and climbers began to explore the mountains and analyse their structure. One of the earliest mountaineers was Horace-Bénédicte de Saussure, who scaled Mont Blanc in 1768. He was driven by the desire to understand the “basic structure of all these great mountains”.

The real breakthrough in Alpine research came with the Swiss physician and natural scientist Johann Jakob Scheuchzer (1672-1733), who conducted a scientific investigation of the Alps and published his findings in a curious volume entitled Naturgeschichten des Schweizer Landes (A natural history of Swiss lands). The theories put forward in this book are a fascinating mix of natural science and mythology, and include a compendium of different species of dragon.